We have meandered gently onwards after basking in the glorious heat of Sunday (31° no less) and have stopped here in Villeneuve-sur-Yonne.  A quite unremarkable town with of course a fabulous church.  The church is under major restoration and partial rebuild which I doubt you would seen very often in England.

Lunch was successful.  There was little choice in venues however and we ate at a small tabac with low expectations.  When served we were both pleased to see that our expectations had been surpassed. 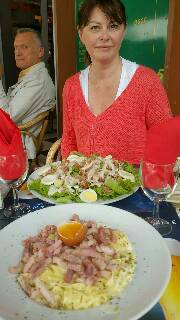 There was entertainment while we ate.  Unintentional entertainment in the form of a woman whose card had been eaten by the nearby atm machine.  I think she spent around 1 hour shouting at the bank in the hope that it would open just for her.  Everyone knows that nothing happens between 12.00 and 2.00!  The noise she was making resembled a wailing banshee and her words were undeciferable.  Then she started smiling at us and so we decided to leave.

Since Sunday the weather has been a little … wet.  See the clouds bearing down on us?  Yep, we got that a few minutes later!

There is a lovely rampart at either end of the town. 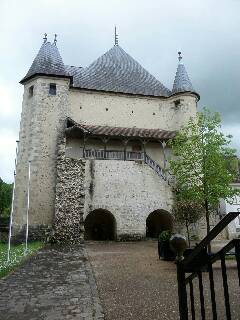 With a small but very lovely garden to walk through. 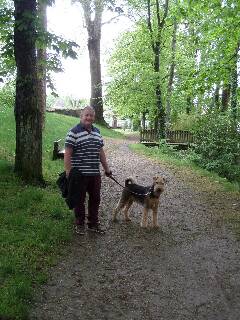 Yesterday we needed to take Teddy to the vet.  He’s had a wart on his tail for years and between him and Herbie it has been chewed off and is now badly infected.  Once I investigated and saw the extent of damage off we went to the lovely vet who shaved his tail and cleaned then dressed it.  He sent us on our way armed with bandages and iodine and antibiotics.  Poor Teddy is thoroughly fed up with people fiddling with his tail and I think he’s more than a little embarrassed by the bandage!  Poor lad!

Now though, Kevin can’t keep still so we are on the move heading towards the next big town, Sens, with the rain torrenting down.

We went through a few locks with this beast … We haven’t seen one of these for a while!

2 thoughts on “Villeneuve -sur-Yonne and a screaming banshee”